Reuters Newsmakers are discussion forums that bring together top global experts, CEOs, politicians and thought leaders in conversation with senior Reuters editors in front of a live and virtual audience. They take place regularly at Thomson Reuters offices around the world. Read More 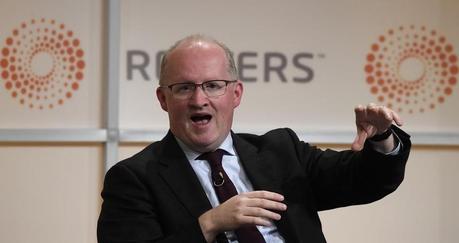 LONDON The European Central Bank will provide stimulus to the euro zone economy until the bloc's inflation rate is on the path towards its target, with March next year providing an important "staging post", Governing Council member Philip Lane said on Friday. | Video

Growth and inflation stir in euro zone, but ECB wants to know if it will last Oct 28 2016

LONDON With a more than trillion euro fuel injection and no interest rates worthy of the name, the euro zone economy is stirring, more data confirmed on Friday, leaving policymakers hunting for signs the nascent recovery is sustainable.

LONDON/FRANKFURT The European Central Bank will provide stimulus until a sustained inflation rebound, even as its unprecedented measures come with side effects and face constraints, two policymakers said on Friday, just as the bank is contemplating more easing.

LONDON There is likely to be a significant flight of financial activity out of Britain if companies are no longer regulated on equivalent terms to those in the European Union after Brexit, European Central Bank council member Philip Lane said on Friday.

Canada's PM not worried about NAFTA, regardless of U.S. election winner Oct 07 2016

TORONTO Canadian Prime Minister Justin Trudeau said on Friday he was not overly worried about the future of the North American Free Trade Agreement (NAFTA), even though the main U.S. presidential candidates have said they want to change the deal. | Video

TOKYO The Bank of Japan made an abrupt shift on Wednesday to targeting interest rates on government bonds to achieve its elusive inflation target, after years of massive money printing failed to jolt the economy out of decades-long stagnation. | Video

Reuters Newsmaker: Prosperity for all (82:53)